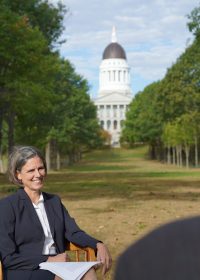 Kristin L. Aiello, Senior Attorney, represents individuals with disabilities who have been discriminated against in employment, state and local government and public accommodations. Kristin’s work focuses on litigation, as it has for over twenty years as a disability rights attorney. She leads the Americans with Disabilities Act (ADA) Team at Disability Rights Maine and is a frequent trainer and lecturer on the ADA and the Maine Human Rights Act. Kristin was lead counsel for the plaintiffs in Doe v. Rowe, 156 F. Supp. 35 (Me. 2001), a seminal ADA voting rights case which overturned Maine’s constitutional provision prohibiting individuals under guardianship for reason of mental illness from voting, and was later cited by the U.S. Supreme Court in Tennessee v. Lane. In 2021, Kristin was lead counsel in another seminal voting rights case filed in the U.S. District Court for the District of Maine, Merrill, et al v. Bellows, et al, Case No.1:20-cv-00248-JAW, which resulted in an accessible absentee voting system in Maine for all individuals with print disabilities. Kristin has served as a Commissioner on the Maine Human Rights Commission, where she heard and decided discrimination cases brought under the Maine Human Rights Act.

Kristin represents adults and children with disabilities at the Maine Human Rights Commission and in state and federal courts. In addition to her case work for individual clients, Kristin educates policy makers at the Maine Legislature regarding disability law and she has conducted disability law trainings to many diverse groups over the years, including the National Disability Rights Network, Jacobus tenBroek Disability Law Symposium, Maine State Bar Association, the State of Maine, individuals with disabilities, advocacy organizations such as the MS Society and Maine Council on Aging/Wisdom Summit, private employers, police departments, Maine Criminal Justice Academy, educators, social workers and many others.

In 2016, Kristin was unanimously elected and currently serves as co-chair of the Employment Law Section of the Maine State Bar Association. She has also been called to serve the federal courts, including the planning committee for the 2018 Judicial Conference for the District of Maine and she currently serves on the Local Rules Committee for the District of Maine. Kristin formerly served on the Blue Ribbon Commission on the Maine Unemployment System. In 2007, she was appointed by the Maine Legislature to participate in redrafting the definition of disability in the Maine Human Rights Act, which led to ground breaking changes that influenced the Americans with Disabilities Amendments Act of 2008. In 2015, Kristin was appointed to the Task Force to Ensure Integrity in the Use of Service Animals, to serve in the role of attorney with experience in state and federal law governing service animals. Kristin is a member of the Maine Employment Lawyers Association, the National Employment Lawyers Association and the Disability Rights Bar Association. She is a graduate of Boston College, magna cum laude, and University of Maine School of Law where she participated in Moot Court, received honors in trial practice and thoroughly delighted in trying cases as a law student intern with the Cumberland County District Attorney’s Office. She enjoys a challenge and delights in seeing her clients reach their goals.