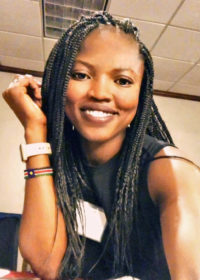 She first began her work with the ACE program in the Army National Guard, where she received training in suicide prevention for soldiers struggling with their mental health. While serving, Moon recognized the stigma attached to mental health struggles and saw that conversations about mental health issues were prevalent across many cultures. She also understands that there is a potential for damage to be done when safe spaces aren’t provided for communities’ members to feel comfortable enough to share their vulnerability, which affects attempts to provide quality service and care to vulnerable and at-risk populations. In 2017, Moon received the Pearl Johnson Award from the National Association for Rights Protection and Advocacy for her passionate advocacy on behalf of individuals with psychiatric labels in disproportionate and low-income communities. In 2019, Moon was honored with the Emerging Young Advocates Award from The Bazelon Center for Mental Health Law in Washington, D.C.

Moon emigrated to the United States from South Sudan as a child and uses her and her family’s experience and trauma to educate and enlighten providers, consumers, policy makers, and community members about the importance of inclusion, as they serve increasingly diverse communities. Having emerged as a public speaker, she has collaborated with renowned educational institutions, such as Harvard University, Bates College and Georgetown University, to provide talks and workshops for students who will be tomorrow’s service professionals. She is also involved in Maine’s South Sudanese community providing mentoring to young immigrant professionals, advocates and aspiring change-makers, seeking to instill in them the value in potently representing their communities’ respective identities in whatever fields they enter.

AS DRM’s Cultural Strategist, Moon works to build bridges and partnerships between immigrant/disproportionately represented communities and the lawyers and advocates working to stand up for their rights. In recruiting and training advocates in those communities the hope is to begin bringing their voices to legislative and decision-making tables, where they have been historically absent.