I. A sneak peak at DRM’s report on restraint and seclusion

In early 2017, DRM will release a report on the use of restraint and seclusion in Maine schools.  The report, which was based on the analysis of four years of data reported by school districts across Maine to the Maine Department of Education (“MDOE”), and data requests by DRM to 42 school districts, as well as the review of individual case files, will contain conclusions that might trouble parents, advocates and policymakers.  Although the report has not been finalized, we are providing an advance look at some of the conclusions here.

A) Although reporting of the use of restraint and seclusion is required by MDOE Rule Chapter 33,[i] many entities covered by the law continue to fail to report this data.

Although reporting rates have increased since underreporting was first identified as a problem by MDOE several years ago,[ii] only 73% of “covered entities” reported any data for 2016.  While the majority of larger entities are reporting data, there is still no data reported at all from entities educating approximately 12% of Maine students.

B) The data reported is unreliable.

In addition to the complete failure by over 25% of covered entities to report data, DRM’s investigation uncovered significant concerns about the data that is reported.  Data reported to MDOE did not always match the data obtained by DRM through public records requests.  For example, one school department reported 140 uses of restraint and seclusion in 2015; but data obtained by DRM showed at least 1,391 additional uses of restraint and seclusion in that school district.  And evidence of underreporting was also uncovered by comparing data reported to MDOE with information from individual case files.  For example, DRM reviewed the file of one student who was restrained/secluded over 400 times in one school year, and this was nearly three times the number of restraints/seclusions reported for the entire school district that year.

C) Students with disabilities in Maine are subjected to grossly disproportionate uses of restraint and seclusion.

Students in special purpose private schools (SPPS), all of whom have identified disabilities, represent approximately 0.5% of students in the state, but were involved in approximately 53% of the reported uses of restraint and seclusion. 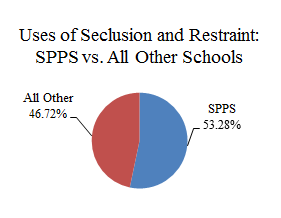 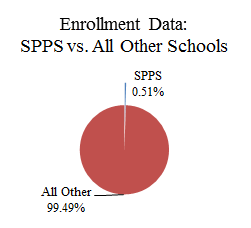 ***Stay tuned for the release of the full report!***

Chapter 33, the rule governing the use of restraint and seclusion in Maine, regulates the use of these emergency interventions.

Restraint and seclusion are only permissible “as an emergency intervention when the behavior of a student presents a risk of injury or harm to the student or others, and only after other less intrusive measures have failed or been deemed inappropriate.”[iii]  And the use of these emergency interventions must be discontinued as soon as possible when the student is no longer presenting a risk of injury or harm.

Restraint and seclusion are expressly prohibited for: punitive purposes; staff convenience; to control challenging behavior; to prevent property destruction in the absence of a risk of harm; or as an educational or therapeutic intervention.

Any use of restraint or seclusion triggers a duty to notify parents verbally and in writing, and requires debriefing for the student and with the staff.  The required written incident report should provide a detailed description of the prior events and circumstances leading to the use of the restraint/seclusion, including an explanation of the less restrictive interventions used.

Chapter 33 also requires that schools have a local complaint process if parents are concerned that restraint or seclusion was used inappropriately.  In addition, parents unsatisfied with the local process can file a complaint with MDOE.

***If you are an individual with a disability or if you are the parent of a child with a disability and are concerned about the inappropriate use of restraint or seclusion at school, call DRM at 1.800.452.1948 to request an intake appointment.***

III.  Resources on restraint and seclusion from the Department of Education

Over the past several years, the U.S. Department of Education (DOE) has issued guidance and provided resources on restraint and seclusion and positive behavioral interventions in schools.  Here are some links to additional information:

A. Dear Colleague Letter: Restraint and Seclusion for Students with Disabilities (December 28, 2016), available at: https://www2.ed.gov/about/offices/list/ocr/letters/colleague-201612-504-restraint-seclusion-ps.pdf

C. Restraint and Seclusions Resource Document (May 2012), available at: https://www2.ed.gov/policy/seclusion/restraints-and-seclusion-resources.pdf

This material is presented for educational purposes only. It does not take the place of legal advice in any specific situation, nor is it offered as such by the author. The material is intended to be timely as of the date written and/or originally presented. Due to the rapidly changing nature of the law, the information contained above may become outdated. It is the responsibility of any individual using or relying on this information to confirm its timeliness.

[ii] See: Christopher Cousins, Data from schools show widespread use of restraint and seclusion, but validity of numbers debated. THE FORECASTER, September 27, 2013. available at: http://www.theforecaster.net/data-from-schools-show-widespread-use-of-restraint-and-seclusion-but-validity-of-numbers-debated/ (noting that in 2013, 65 school districts failed to submit their data as required by law, and reporting that a spokesperson for MDOE “said the data collection system is a work in progress and that the department is hopeful that more schools will comply in the future.”)