Maine people did so once again in record numbers this midterm election (a general election that takes place in a non-Presidential election year). Maine voters with disabilities were no exception, and Disability Rights Maine worked hard across the state to increase, encourage, and support the growing power of the disability community’s voice and vote.

Much has changed since I was first a full-time advocate with DRM (then known as Maine Advocacy Services) in 1989 - both at the agency and in voting rights and access for Mainers with disabilities. For one thing, our current Executive Director was then an advocate for the CAP program, then an advocate in the PAIMI program, then PAIMI Program Director, before becoming the Executive Director. The agency employed approximately 15 staff people. Mainers under guardianship did not have the right to vote. Federal Protection and Advocacy Agencies did not have PAVA (Protection and Advocacy for Voting Access) funding, and thus no voting advocates or programs. Technology and assistive technology were in their infancy. Perhaps most critically, the Americans with Disabilities Act, was on the verge of passage, but had not yet been enacted.

Fast forward to 2022. I am once again a full-time staff member of Disability Rights Maine, now at the other end of a career in various settings centered on amplifying the voices, rights, and self-determination of people with disabilities. It is such a privilege to be back and to be a part of a team that now numbers more than 50. Our staff come from varying backgrounds, education, employment and life experiences, but all share the same dedication to advancing justice and equality for people with disabilities. And what a great team this staff is!

My first day back working for DRM came just eight weeks before the election – crunch time for all things voting. Given that DRM staff all have multiple specific responsibilities in their own positions and programs apart from voting access work, I was surprised, amazed, and relieved by not only the welcome from existing staff, but the voting knowledge they shared with me. Most of all, I was inspired by the collective action our staff took to ensure people with disabilities were registered to vote, trained on their rights, and educated about the entire process of exercising their right to vote.

In those short weeks, DRM staff:

We also collaborated with the League of Women Voters, Democracy Maine, Rock the Vote, The National Disability Rights Network (NDRN), and the REV UP initiative. And, we worked closely with Maine’s Secretary of State to train more than 100 election clerks on the rights of voters with disabilities in Maine. A special thank you to DRM’s Public Policy Director, Sara Squires, who organized and conducted these training events.

Wow, we were busy!

Election day, November 8, 2022, brought me back to the excitement of my childhood. I was raised by two parents very active in Maine politics and public service, so I’ve been involved in every aspect of civic engagement since I was 6 years old. I’ve knocked on doors, called to arrange rides to the polls, held signs at rotaries and bridges, accompanied adults getting absentee ballot applications out to voters in the days before our electronic options, and dropped election literature at doors throughout Kennebec County. It’s shaped who I am.

With those experiences in my memory bank, returning to DRM for the 2022 Election Day was awesome. DRM staff were present at polling locations across Maine all day long, where we observed and monitored access to in-person voting for voters with disabilities. We noted everything from the availability, privacy, and working order of the Accessible Voting System, to whether the polling place had enough designated parking and van accessible parking for people with disabilities, to obstructions into the polling location, and other ADA required compliance for voting access. We also operated a voting rights hotline. Our PAIMI program advocates and attorneys worked to resolve a number of obstacles for individuals in hospitals and state institutions who were trying to utilize Maine’s Special Circumstances Absentee Ballot option. We worked closely on Election Day with Maine’s Deputy Secretary of State, Julie Flynn, whenever our staff encountered a concern. We are grateful to have an extremely responsive Secretary of State’s office, who is dedicated to ensuring that all eligible voters who want to exercise their right to vote are able to do so.

Much has changed since I first began my career at Disability Rights Maine. Not only do we have more staff, but access to voting has changed. We have more ways to vote, people under guardianship can now vote in Maine, and there are new laws that expanded access to voting for people with disabilities – thanks to both the ADA and the Help America Vote Act (HAVA). Much more remains to be done to increase voter access, registration, and turnout among voters with disabilities. There is a need to increase the information, education, and opportunity to access the voting process for people with disabilities. This is particularly true for those of us whose choices and autonomy have often been disregarded in various aspects of our lives.

The next general election is in 2024, but our preparation starts now! 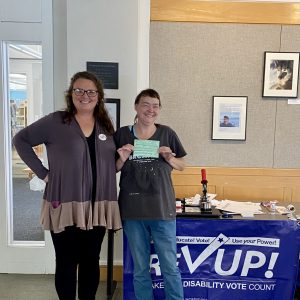